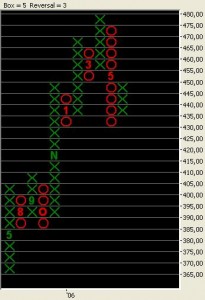 The correct way to draw a point and figure chart is to plot every price change but practicality has rendered this difficult to do for a large quantity of stocks so many point and figure chartists use the summary prices at the end of each day. Some prefer to use the day’s closing price and some prefer to use the day’s high or low depending on the direction of the last column. The high/low method was invented by A.W. Cohen in his 1947 book, ‘How to Use the Three-Point Reversal Method of Point & Figure Stock Market Timing’ and has a large following.

Because point and figure charts are plotted on squared paper, 45 degree lines may be used to define up trends and down trends from important highs and lows on the chart allowing objective analysis of trends.

Continiue to next Lesson