In general terms, island reversal can be defined as a compact trading activity within a range of prices, separated from the move proceeding it; this separation is caused by an exhaustion gap and the subsequent move in the opposite direction occurs as a result of a breakaway gap. 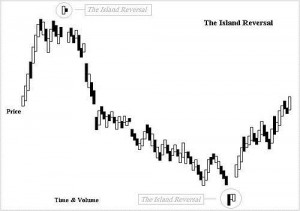